The Digital Euro Landscape: An overview of ongoing initiatives in Europe and beyond

Discussions on a digital euro have accelerated due to the announcement of foreign and private sector initiatives and the COVID-19 crisis. Both public and private stakeholders are now increasingly exploring ways to tackle the shortcomings of current payment systems while addressing financial and monetary stability risks. At present, 80% of central banks are exploring Central Bank Digital Currencies (CBDC), while half of them are eyeing both retail and wholesale CBDCs.

This article attempts to summarize at a high level a number of the developments with regard to a possible digital euro as well as certain other events that likely will impact a digital euro.  It also discusses the activities of a number of countries and their central banks with respect to central bank digital currencies.  The reader is urged to review the direct sources for more information and context.

France has already begun experimenting and the UK is consulting on the subject. Meanwhile, the Netherlands has published detailed recommendations for the digitalisation of the euro. China, on the other hand, is already piloting its own CBDC, while the private Libra associations plans to launch its stablecoin by the end of 2020. The ECB is also actively assessing the idea together with a group of five other central banks, including the Bank of Canada, the Bank of England, the Bank of Japan, the Bank of Sweden and the Swiss National Bank. In the US, private initiatives are looking into digitising the dollar in response to the COVID-19 crisis. While all of these initiatives are driven by similar objectives, they could be designed in vastly different ways.

The race towards a digital euro was first prompted by China in 2019 when it announced its work towards digitising the Yuan. Most recently, the Chinese central bank began testing its CBDC in April 2020. While the details around the Chinese CBDC remain a secret, rumours suggest that it may not be blockchain-based, will have a two-tier structure, will not be account-based and will be fully backed by central bank deposits from commercial banks. The Chinese CBDC will also not be decentralized.

At the same time in 2019, a consortium led by Facebook began contemplating the Libra stablecoin which further accelerated thinking on stablecoins by regulators and central banks. The Libra project would be based on a permissioned blockchain and backed by a reserve of assets. As it stands, Libra and China will be the driving forces for shaping the market for stablecoins and CBDCs.

What most initiatives in advanced economies have in common is their objective of improving financial stability, monetary policy, financial inclusion, domestic and cross-border payments efficiency, and payments’ safety overall. With these motivations in mind, these initiatives also seek to guarantee the highest standards of security, convenience and privacy. CBDCs can be designed in various ways to achieve these goals and reflect the policy needs of regulators. With regards to the type of remuneration, CBDCs can be either interest-bearing or non-interest-bearing. With regards to accessibility, they can be wholesale or retail. A design choice can also be made between account-based (requiring an intermediary such as a central bank) and token-based CBDC (allowing peer-to-peer transfers without an intermediary). Furthermore, they can be either one-tiered or two-tiered and can be either DLT based or non-DLT based. It is generally accepted that a digital euro would be backed by a reserve of assets to avoid the high volatility associated with other digital currencies such as Bitcoin. All of these considerations matter in the debate as they are directly linked to the objectives that a CBDC seeks to achieve. For instance, the graphic below by the Dutch National Bank provides an overview of the consumer needs linked to these design choices. With regards to retail CBDCs, regulators generally focus on two key concerns: financial stability linked to potential bank runs and striking a balance with regards to anonymity of payments. Recent ECB papers (here and here) have shown that these concerns can be addressed adequately. A more difficult question to answer would be who should issue the digital euro. However, this is a question to be addressed in a separate article. 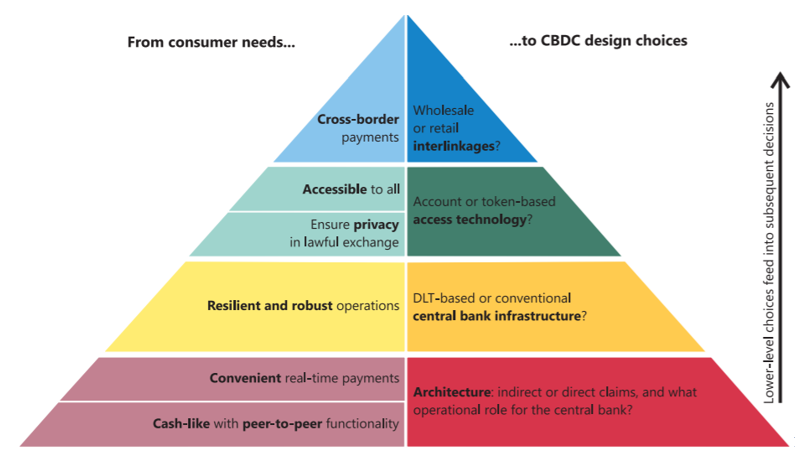 The Dutch National Bank recently published a report highlighting its readiness to support the development of a European project, and proposing options for the design of such an initiative. The Dutch approach focuses on an account-based retail CBDC, suggests that individuals and legal entities would hold accounts with central banks, and specific technologies could be used to help reduce transaction costs in the ecosystem. DNB illustrates below existing initiatives and how they address the issue of privacy. DNB, however, strives for a centralized solution and dismisses the idea of using blockchain / DLT as the underlying technology. We believe that the case for a blockchain or DLT-based digital euro is stronger and we would invite the Dutch National Bank and other central banks to further consider its benefits.

Banque de France (BdF) has launched a call for applications for experimenting with a wholesale CBDC for financial markets. BdF will support token issuance, finality of payment transactions and the technical platform allowing delivery-vs-payment to deliver payment in CBDC against financial instruments, digital currency of another central bank and digital assets. The CBDC will be account-based, with accounts opened with the BdF and the corresponding amounts covered by collateral in accounts opened by the BdF.  Most importantly, it is not imposing any specific technology choice and innovativeness is a selection criterion. As such, the use of blockchain technology/DLT as the underlying technology was not excluded. On 20 May, BdF announced a major milestone, announcing it successfully tested wholesale CBDC based on blockchain technology to settle the issuance of financial instruments. BdF’s ambitious and innovative initiative is, therefore, one to watch in the months to come.

Bundesbank and the Association of German Banks’ stance on CBDC

The German Bundesbank has generally remained cautious towards CBDCs. Jens Weidmann, President of the Bundesbank, recently said that there is a need to first assess the pros and cons of CBDCs before deciding whether it is needed. He also believes that it should be up to the market to develop such services rather than the government. Previously, he has outlined the potential risks of CBDCs and urged caution before considering their issuance. In contrast, the debate on a digital euro is largely driven by commercial banks in Germany. They have been more supportive of the idea, calling for a programmable account and crypto-based retail digital euro, along with a common pan-European payments platform. The digital euro they envision would be interoperable with book money and incorporate the use of smart contracts, thus bringing considerable advantages in terms of efficiency and automation. This could be particularly interesting for the industry and retail sector across Europe.

Bank of England consults on a CBDC

The Bank of England (BoE) published a discussion paper as part of its consultation process on a retail CBDC. BoE considers that there are trade-offs for each design option. In terms of design, BoE provides a list of principles which should underpin a CBDC. According to them, a CBDC should be reliable and resilient, fast and efficient, innovative and open to competition. On the basis of these principles, BoE supports a CBDC consisting of a core ledger provided by BoE, while the payment interface would be provided by private actors. While they do not consider that a CBDC must necessarily be built on DLT or blockchain technology, they believe that this technology offers useful and innovative features in terms of resilience, availability and smart contracts. BoE also considers that both an account and token-based approach could be taken. Lastly, BoE is of the view that the involvement of both the public and private sector is needed to achieve its principles.

Another initiative worth mentioning is the Bank of Lithuania’s report in December 2019 on CBDC. According to the Bank of Lithuania’s rather neutral paper, the CBDCs can help meet global citizens' need for a safe, trustworthy and cost-efficient instrument for cross-border payments. They also believe that certain design choices can tackle monetary policy and financial stability concerns. Bank of Lithuania considers the main design features of CBDCs in the table below, demonstrating their flexibility and comparing them to other versions of central bank money. At the same time, Lithuania is working on its own retail CBDC (LBCoin) which is blockchain-based and would represent collector coins.

Fabio Panetta, Deputy Governor of the Bank of Italy has also discussed the need for CBDC in a speech at the SUERF/BAFFI CAREFIN Centre Conference. In his speech, Mr Panetta outlined the benefits of CBDCs and differentiated them from other digital currencies such as Bitcoin. He noted that the role of central banks in the economy would change if they began issuing CBDCs, and underlined that they are, at present, not ready to assume this role.

In February 2020, the Swedish Riksbank announced it has already began testing a retail digital krona. This would offer citizens an alternative to cash, which is guaranteed by the state and enable instant peer-to-peer transactions. While Sweden has not made a decision on whether to issue a CBDC, the success of the test could spur further support for CBDCs. The test will run until February 2021 and be based on blockchain technology. We believe that initiatives such as the e-krona experiment are crucial in better understanding CBDCs and the benefits of blockchain technology.

In December 2019, the Swiss Federal Council also published a report on CBDC. The report saw no additional benefits of CBDC for the moment, but rather additional risks in terms of financial stability. It further notes that a wholesale CBDC would add more benefits than a retail one. 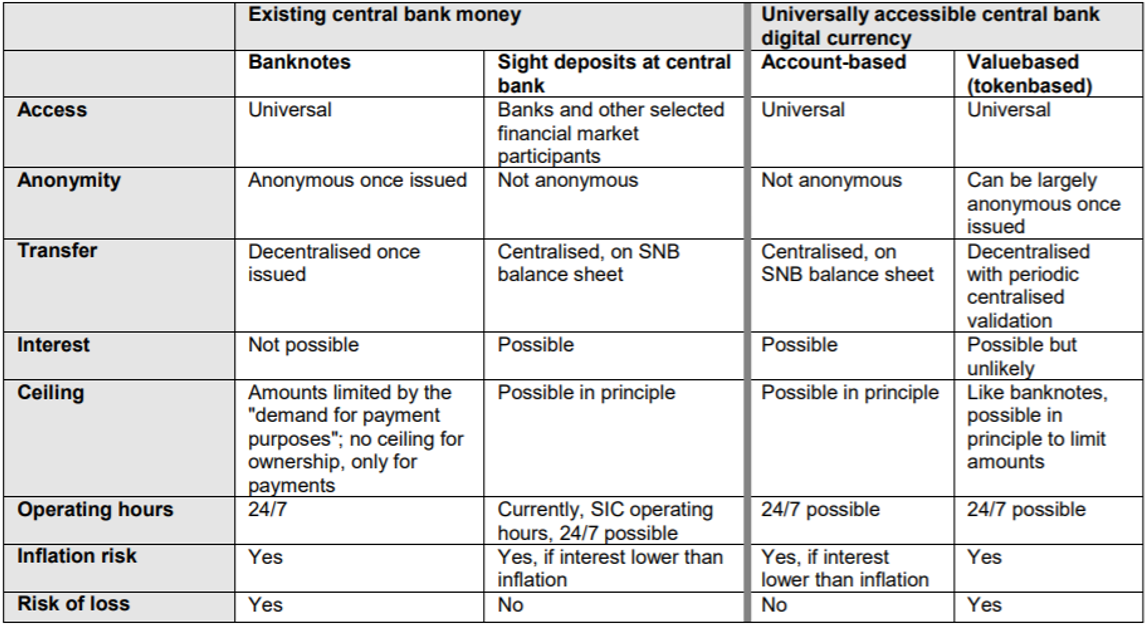 In the US, the debate on CBDCs was reignited by a recent early draft of a COVID-19 stimulus bill. This bill suggested the use of a digital dollar to facilitate the distribution of stimulus payments in a quick and contactless way. In the end, the idea was scrapped from the final draft of the bill. Nevertheless, the discussion continues with the launch of the Digital Dollar Project co-lead by former Chairman of the U.S. Commodity Futures Trading Commission (CFTC) Chris Giancarlo. The project seeks to provide a framework for the development of a US CBDC under which a digital dollar could be two-tiered, distributed by commercial banks, token-based and potentially using DLT.

While both the public and private sector are racing towards a solution, the end result will likely require cooperation between those sectors. As a first step, however, regulators need to guarantee legal certainty for digital currencies to enable innovative solutions.

We believe that the case for a blockchain or DLT-based digital euro is stronger as it provides strengthened security, resistance to manipulation, automation/programmability and efficiency gains compared to other technologies. The concerns of policymakers as well as the policy objectives they seek to achieve can be easily achieved through a tailored technological and economic design. Therefore, we invite central banks to seriously consider the use of blockchain technology when attempting to digitise the euro. We look forward to the upcoming consultative process by the ECB in this respect later this year. 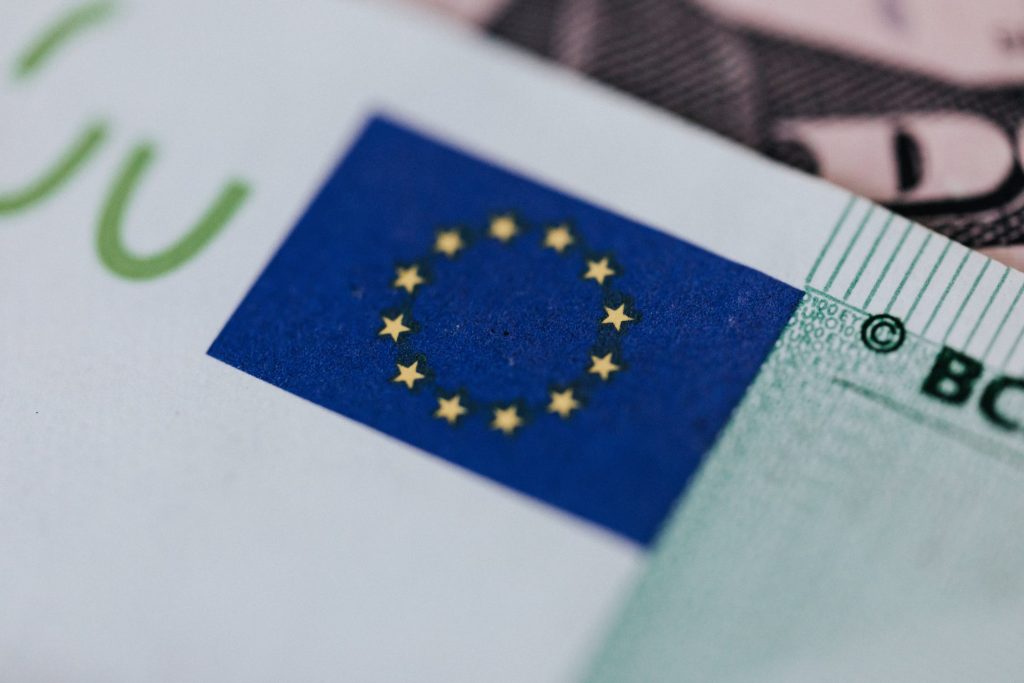