Brussels, 31 March 2022 – Today’s adoption in the EP’s joint ECON-LIBE Committee of the draft report on the Transfer of Funds Regulation (TFR) represents a huge, missed opportunity. The EU failed to advance future-proof regulation for our nascent blockchain industry which would have ensured consumer protection and position Europe as a global leader in the future Web3.0 economy.

As Blockchain for Europe (BC4EU), we would like to acknowledge the efforts that a substantial number of the MEPs involved have made in trying to accommodate the views of all political groups and interested stakeholders. Many members of the ECON and LIBE Committees showed their readiness to listen to the concrete concerns of the blockchain industry, especially when discussing such technical issues that are often not easy to understand and misperceived.

However, notwithstanding the letter that we sent out to all members of the ECON and LIBE Committees outlining the concerns of the blockchain sector and its consumers with the latest compromise text ahead of today’s vote, we have to express our disappointment in the final outcome. Particularly, we regret the Committees’ decision, even if by very small margins, to introduce impractical verification requirements for transfers to and from unhosted wallets and to prohibit transfers to entities which are unable to comply with outdated regulations. The former will not only be impossible to comply with, without limiting one of the key promises of blockchain technology, but will also cut off innovation such as Decentralised Finance (DeFi) from the fiat world in the EU. Without the necessary safeguards, the latter also risks placing DeFi and Decentralised Autonomous Organisations under obligations they cannot comply with for the lack of a central entity.

The consequences of this adoption, subject to the outcome of the upcoming trilogue discussions, are massive. First, the signal such an adoption will send towards innovators across the globe is that Europe is not a place for innovation and, therefore, not a market worth investing resources in. In consequence, the promises of Web3.0 innovation will move to other jurisdictions as the implementation of peer-to-peer transactions is key to Web3.0. In parallel, jobs and growth that would have been created and triggered in the EU single market will move elsewhere or drastically slow down. Therefore, the global leaders in the future Web3.0 economy will not be based in the EU. Finally, European consumers who still want to participate and interact with Web3.0 will have to do so through non-European entities and outside the EU regulatory environment.

Overall, this will lead to insufficient consumer protection, huge privacy concerns, a reduction of Europe’s competitiveness and a missed opportunity for better law enforcement at European level.

The latter, especially, is the paradox of the current situation. MEPs were discussing and voting on the TFR file, a key part of the Anti-Money Laundering (AML) package, which aims at improving AML in the crypto sector. However, by imposing outdated rules and regulatory frameworks that are not fit for innovative blockchain technologies, the final result is that of having missed the opportunity to actually improve AML in the financial sector by leveraging the possibilities provided by the underlining blockchain technology.

Luckily, the politically-driven mistakes of the European Parliament can be fixed during the trilogue negotiations with the Council of the EU. The latter has taken the right approach when it comes to unhosted wallets. We call on the French Presidency of the Council of the EU to safeguard this approach for the sake of the future of the European economy and the safety of its consumers. 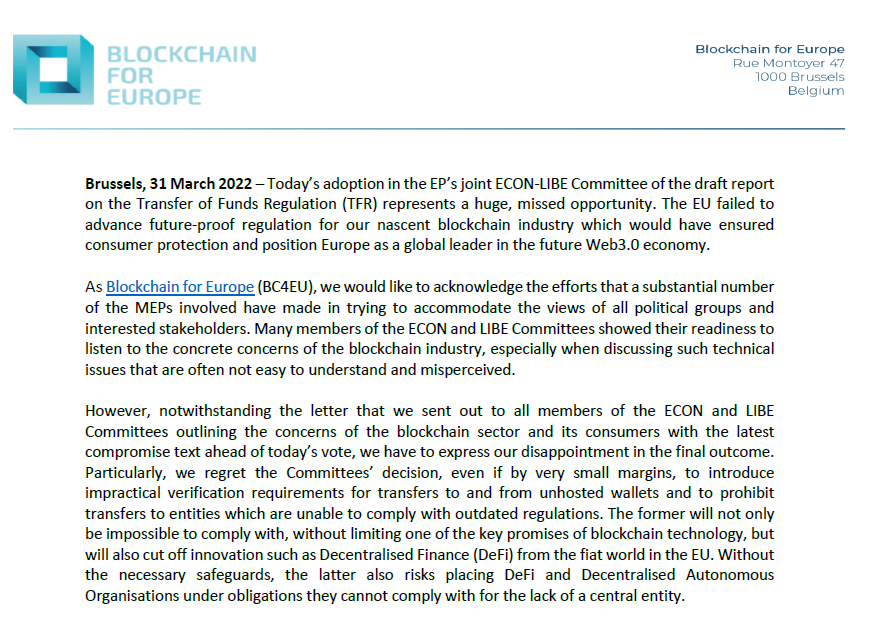