China’s Digital Yuan: The Start of a New Era

This is the first article in our ‘Asia in Focus’ series, exploring recent developments around Blockchain technology and CBDCs in Asia.

The digital yuan will be the start of a new era in payments, allowing China to be the first major economy to deploy its own central bank digital currency (CBDC).

In April 2020, after six years of work (the research commenced in 2014), the Chinese Government announced the launch of the tests of the country’s central bank digital currency (CBDC), DCEP (Digital Currency Electronic Payment) or Digital Yuan, in four major cities (Shenzhen, Suzhou, Chengdu and Xiong’an), notwithstanding the COVID-19 pandemic. On 14 August, China took a step further: its Ministry of Commerce announced that a pilot run of the country’s CBDC would begin in several new areas very soon such as the Greater Bay Area (GBA), which includes the two Special Administrative Regions of Hong Kong and Macau. The tests in Hong Kong have just started.

A CBDC is a new form of central bank money accessible to the general public, accepted as a means of payment, legal tender, safe store of value by all citizens, businesses and government agencies. Theoretically, a CBDC should enable cheap, secure and real-time transfer of value, be accessible without a bank account and be built on an open infrastructure to foster competition and innovation.

Even though, according to a report published by the Bank of International Settlements (BIS) in early 2020, 80% of Central Banks in the world are currently working on CBDCs (some are just at an initial research stage, though). However, Asia seems to be the place where CBDCs generated the most interest. In this sense, the major economy leading the CBDC race in Asia (and in the whole world) is China.

There are many possible motivations behind CBDCs: They can replace physical notes, and be used to improve financial stability as a monetary policy tool (to reduce the lower bound on interest rates), promote financial inclusion, fight against financial crime, etc.

Since CBDCs are “programmable money”, it will be up to each government and central bank to decide where they want to put their focus. Undeniably, China’s digital yuan will be beneficial in all the areas mentioned above, however, to me, the main rationale behind the Chinese government eventually launching its digital yuan is promoting the use of the yuan for cross-border payments, thus converting some of the US-dollar-denominated international trade transactions into renminbi-denominated ones, and slowly challenging the dominance of the US dollar in international trade and finance.

This is the reason why the tests in Hong Kong (and Macau) are very important for China, since, thus far, China has been mostly focused on domestic use cases for its DCEP which facilitate consumers´ retail payments. However, the testing of the Digital Yuan in Hong Kong, which is and will remain one of the major financial hubs in the world, could be a great first step to enhance the yuan as a payments currency in the global financial system.

However, the digital yuan does not aim to replace the Hong Kong dollar, since the digital yuan tests in Hong Kong and Macau (and its future deployment once the tests are complete) will aim at cross-border transactions. Since Hong Kong is one of the most open and global cities in the Bay Area, China will be able to leverage this circumstance to promote its digital currency on a global stage, so it is undoubtedly a win-win for all the parties involved.

CBDCs are, to me, the future of money. The interest in CBDCs is not new, and, even without the pandemic, we would have eventually talked about them and we would have seen countries deploying them in the future. However, COVID-19 has undoubtedly sped it all up by a few years. 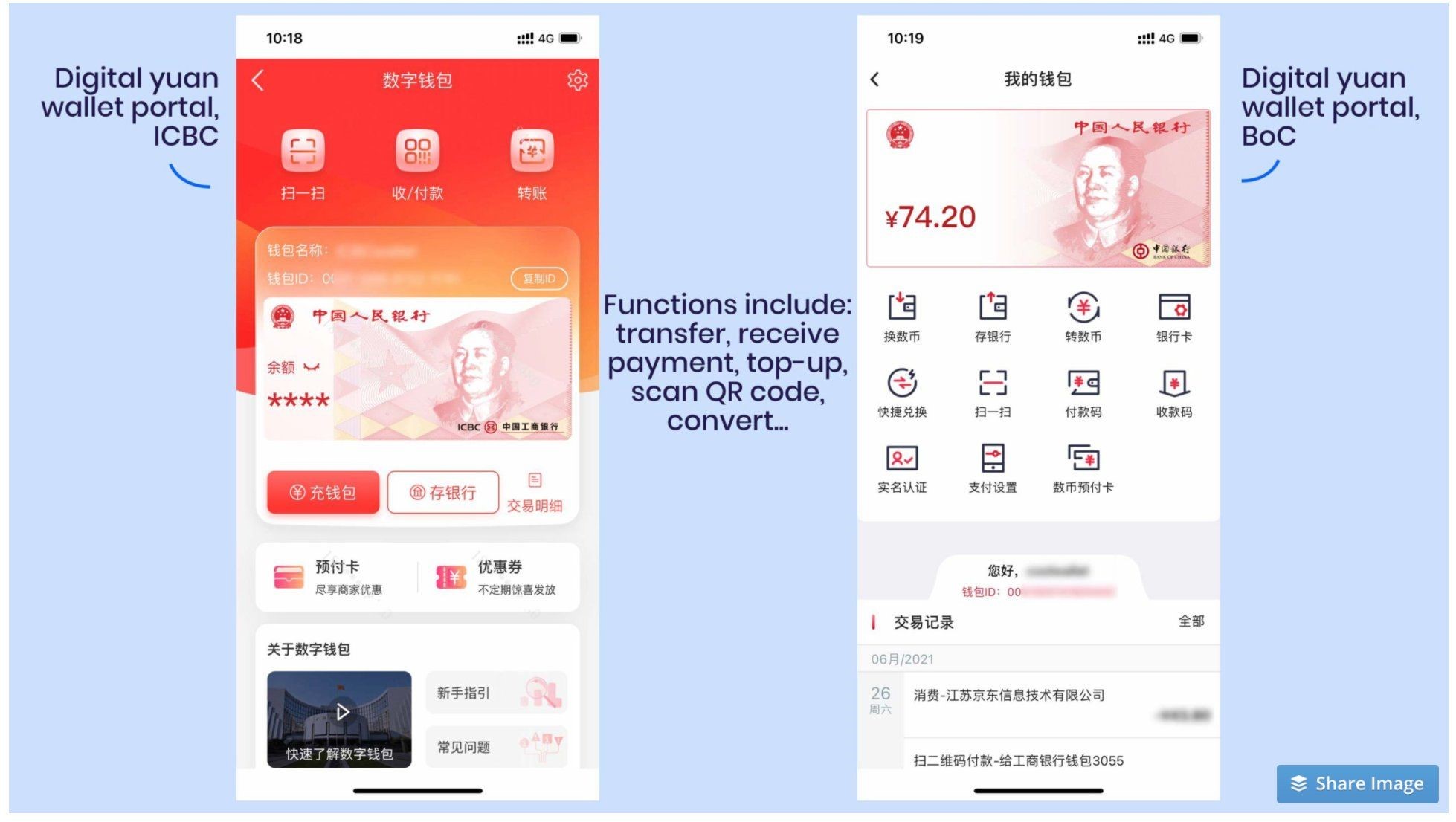 The digital yuan will certainly bring many opportunities and benefits to China: it will allow them to create an important soft-power tool; it will help China to control or at least minimize its shadow banking system; it will cut down money printing costs; for commercial banks, DCEP will facilitate more money transactions with lower costs, and, for the public, DCEP would save them indirect transaction fees for interbank transfers; monetary policy wise, it will enable the Chinese government to better track the flow of money through its economy and make better planning decisions; and the digital yuan will be an effective tool when promoting financial inclusion, since CBDCs can address the needs of unbanked and underbanked people.

According to the World Bank´s Global Findex database, globally, 1.7 billion people do not have a bank account, and policymakers struggle to provide affordable, safe and accessible financial services to the unbanked population. CBDCs can be of huge help in that area.

Aside from this, it might help propel the yuan to international reserve status. It is in China´s interest to not only make the Digital Yuan become an effective domestic tool for facilitating consumers’ retail payments, but to also enhance the yuan as a payments currency in the global financial system. A cross-border deployment of the digital yuan will help take some of the USD-denominated exports and convert them into yuan-based exports, thus challenging the global domination of the USD. 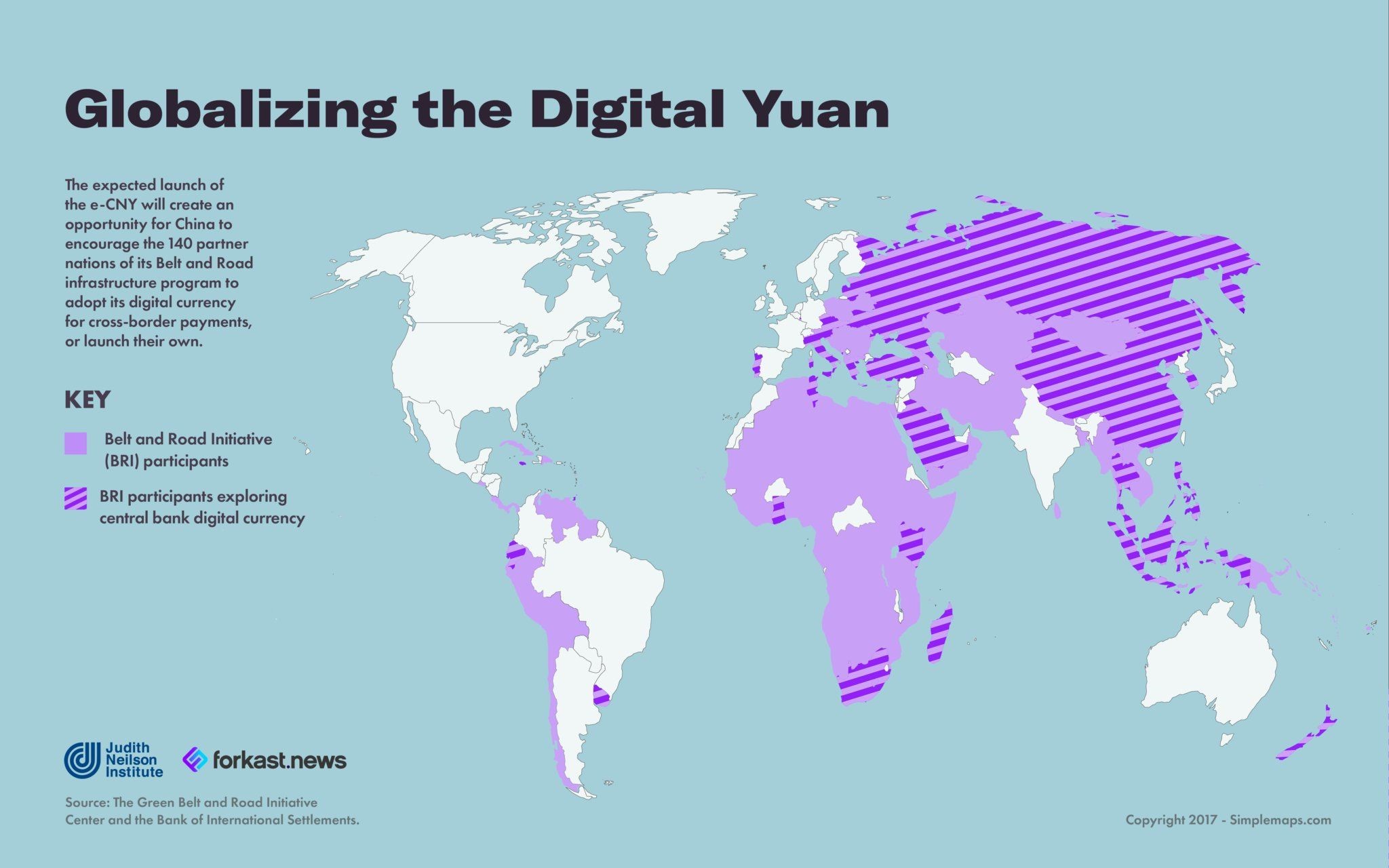 Title: Globalizing the Digital Yuan (2021). Source: The Green Belt and Road Initiative Center and the Bank of International Settlements, via the Judith Neilson Institute and Forkast.news

To sum up, in my title I mentioned that the digital yuan will be “the start of a new era” (in payments) because the DCEP tests are driving many other countries to start testing their own CBDCs. If DCEP proves to be viable, China will become the first major economy to introduce a State-run digital currency (the only country doing this so far has been The Bahamas), and many countries will follow next, since, as previously mentioned, 80% of Central Banks are somewhat engaged in CBDC work (either in a research stage or about to start its pilot stage soon). CBDCs have certainly many advantages, among them the fact that they can be an effective tool when promoting financial inclusion, but also because they can be an effective tool regarding monetary and social policy, technology and innovation, global geopolitics, financial crime prevention… and, because of all those advantages, they are the future.

The author works as a FinTech Advisor and Researcher. He holds an MBA and a doctorate in Hong Kong real estate law and economics. He has worked as a business analyst for a Hong Kong publicly listed company and has given seminars on Central Bank Digital Currencies and Blockchain in many international conferences and universities. 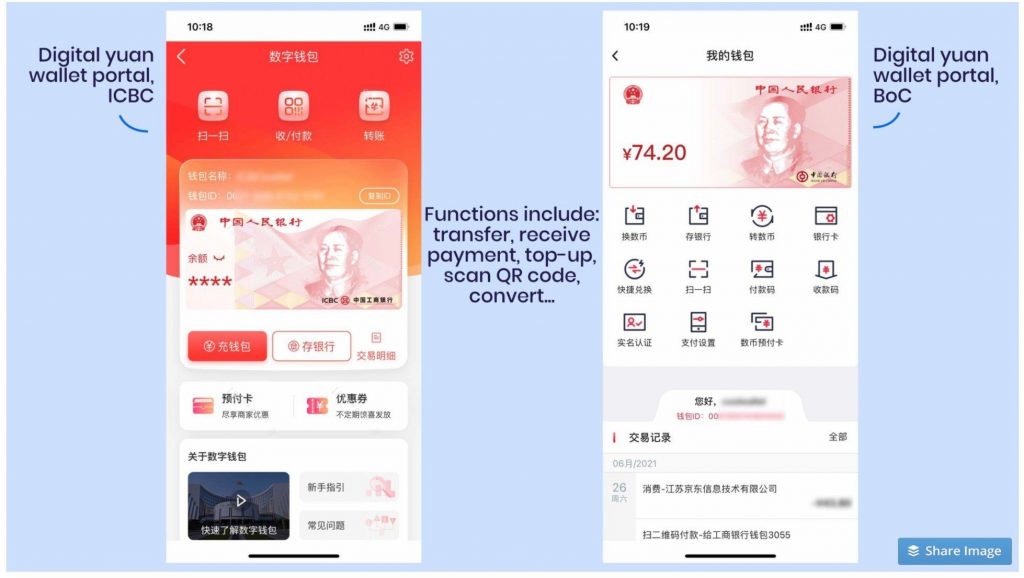